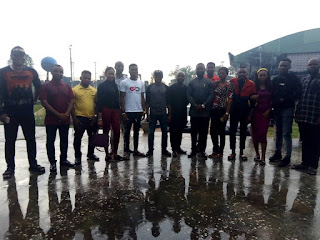 The newly appointed Executive Assistant on Entertainment to Imo State Governor, Mazi Prince Chinomso Aniche has called on stake holders of the industry  to once again come together to rebuild it.

Mazi Aniche who made the call during a meeting with members of Imo State Bloggers Association ISBA harped on unity in the industry as it is one ingredient for the growth everyone is yearning for, adding that his only interest is to contribute his quota to the Rebuild Imo Project as it concerns entertainment in the state.

God knows the reason he made me to be the Executive Assistant on entertainment and my interest is not to fill my pocket, but to raise an entertainment industry which will attract brands, companies and people from other states to Imo" , he said.

He stated that to achieve his visions, the bloggers will be playing an integral role and urged them to come on board to support and help in growing the entertainment Industry of the State, so as to make it a model for other states.

Responding, the president of ISBA Mr. Chinedu Hardy Nwadike congratulated Mazi Aniche on his appointment, calling on him to take off from where his predecessor stopped.

Mr. Nwadike said that growth is a gradual process, urging the EA to work toward policies that will grow the industry and not those that will just fill pockets of individuals. He proposed the setting up of a trust fund which people can access and pay back after a time and also ensuring that the right people are given access to it.

Mazi Prince Chinomso Aniche thanked the bloggers, adding that he will be working closely with the leaders of every arm in the industry to ensure every group is well represented. He called on any group in disagreement with the recent developments in the industry to  put away their differences for the good of the industry.

He added that as a home base artiste, he understands the real need of the industry and entertainers, reassuring everyone that while he would be open to every good idea, he is also loaded with plans to drive the industry to a brand new height.
ENTERTAINMENT