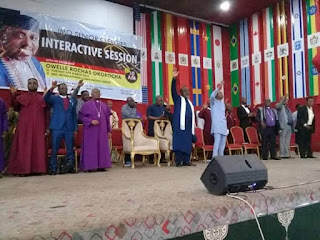 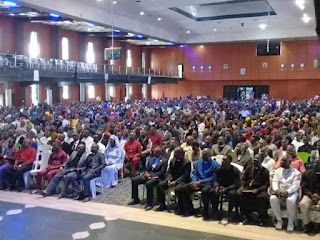 Over seven thousand Pastors including Bishops across the State have adopted the governorship Candidate of Action Alliance, AA, Ugwumba Uche Nwosu as their Candidate for the Saturday, March 9, 2019 governorship election in the State.


A cross-section of more than 7000 Bishops and Pastors in the State who adopted Ugwumba Uche Nwosu of Action Alliance as their governorship Candidate for the March 9 2019 guber election in the State at the Imo International Convention Centre (IICC) Owerri on Tuesday March 5, 2019.

Reports say that they decided to settle for him to enable the State have someone who would sustain the Spiritual, religious and physical legacies of Governor Okorocha.
The men of God had met at the Imo International Convention Centre, IICC, Owerri on Tuesday, March 5, 2019 and looked at the major governorship Candidates in the State and at the end of the day, decided to support the Candidacy of Ugwumba Nwosu, stating that the State cannot at this stage be entrusted into the hands of anyhow person to govern.


Bishop Innocent Erimujor, one of the foremost clergy men in the State, who has been in the ministry for 48years in the State and who spoke on behalf of the Priests and Bishops in attendance said, he began his ministry before the creation of the State and has been around and could talk about every administration that had governed the State both Military and Civilian.

His words “I have become a Priest of God before the creation of Imo State. Right from the time when Imo comprised of Abia and part of Ebonyi States. I also make good to say that I have inherited all administrations in this State till this present one, from Ndubuisi Kanu to one Adekunle Lawal and the one from Okigwe (Ike Nwachukwu) and the rest of them”.

He continued “And since then, I’ve been keeping records and also taken my time to compare their developments and achievements scrupulously. You all know me that I don’t play with my words as long as I am sure that I’m hearing clearly from the Lord. Again I try as much as possible to keep away from the political waters of this State.”

He added “My fellow men of God, I make bold before you all to say that the governor before us here Owelle Rochas Okorocha in his developmental strides have performed credibly more than all the achievements of the rest of them that had governed our dear State. When he came up with the issue of succession, I must candidly say that I was obviously one of his ardent opposition to this”.

He continued “But incidentally, few weeks after, I got an invitation to attend service at the Victory Chapel Government House, just a day to the day of service by the Chaplain, Dr. Bunmi Babs. I wasn’t happy with him but after much ado, I had to abandon my own Service and I saw myself at the Chapel,

“From that time, I was greatly disturbed in the spirit concerning the man Uche Nwosu. The Spirit said, you must go and congratulate him as the future governor of Imo State. It was a war, I had to ask myself what brought me to this Church today?, But then, heaven told me in plain terms that it’s a mandate that I must fulfill. And so, before the end of service, I had to lift up myself from my seat and went to him. My words, I hate you Uche Nwosu but as the Lord mandated me, accept my congratulations as the incoming governor of Imo State.” he stated

His words “Since this is so now and there’s need for continuity in this administration, I think we shall follow the Lord’s bidding. Looking at past administrations, its only this government that has given concern to the down trodden, built Chapels in all the 27 LGAs, sustained free education that it started and the hospitals in all our LGAs, and the CAN Secretariat also in place. I think this is the best thing that has happened to the Christian (orthodox) Churches in the history of this State. Let us therefore not allow those after the treasury of this State to have a reign on it at all. Thank you.”

In his speech earlier, Governor Okorocha said “The State before I came in 2011 was in total darkness, it took God for light to come into the State. Imo people will be foolish to bring back darkness to the State as our Children will never forgive us. In Imo today, we are free, never again shall we return to Egypt. It can only take God to do free education. I remember seeing students been chased out from Catholic Schools, Anglican and Methodist Schools because of School fees, it happened in this land. So Imo people should never allow free education to go”.

According to him “The rescue mission government pulled out this state from hardship and evil deities. I changed Ahiajoku and built Chapels for God all around the State. Ekeukwu market was the headquarters of deities in Imo State and one of my greatest achievements as your governor was the demolition of Ekeukwu. May I announce to you today that Imo is now free”.

He said “I have fought many battles as a governor and most people continue to wonder why the fight. The reason is simply to retrieve the soul of Imo State from the vultures. I have told everybody that has cared to listen that I have the grace of God and anybody that fights me goes down. Look at all the members of the coalition from Madumere to the rest of them, where are they now?”

His words “On Imo governorship, nobody has accused Uche Nwosu of being a fraudster or 419ner, kidnapper, killer or an arrogant man. Nobody is even attacking Nwosu but they are all busy attacking Rochas as if Rochas is running for governor. I am not running for governor and so they should leave me and attack Nwosu who is contesting against them and if they have nothing against him, they should go and sleep and throw in the towel”
POLITICS