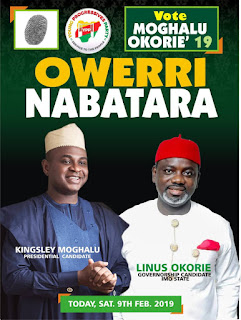 
According to the release, “The public is hereby invited to be part of  the rally which  will begin with a WALK FOR A WORLD CLASS IMO  from the YPP State Headquarters office at No. 126 Okigwe Rd to the Dan Anyiam Stadium, Owerri Imo State.”

“Owerri is agog and excited about the visit of Presidential Candidate of YPP- the most Credible Party not only at the National Level but also here in Imo State with Dr. Linus Okorie as the most accepted Governorship candidate who is head and shoulders above all the other candidates.”

“Professor Moghalu has a track record of leading reforms and bringing positive change to dire situations. As a consultant to the United Nations, he led teams that fixed broken countries like Rwanda, Burundi and Croatia. He will definitely transform Nigeria if voted into office as the next Presidentof Nigeria”, Mr Anyanwu averred

“This 2019 election is a Vote for a Credible, God fearing, Capable and Visionary Leader and Imo people have discovered these sterling qualities in both Prof. Kingsley Moghalu & Dr. Linus Okorie of the YPP. They have perfected their visions to Transform Nigeria and make Imo a World Class State filled with endless possibilities through massive human capital development with emphasis on youth development as well as world class health, agricultural, tourist and manufacturing infrastructure.” 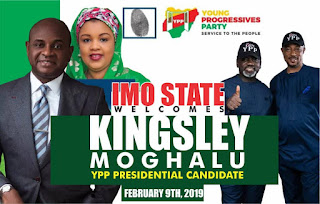 The release further decried the anomalies and youth calculated under engagement in Nigeria politics urging the youth to stand up to the challenge to reform the practice.

“Our old, recycled politicians, with their incompetence and their tired and divisive politics have failed us. That is why we must embrace the New Order. Those politicians have given us poverty instead of prosperity, unemployment instead of jobs, a camotose economy instead of wealth”

Participants and the general public who wish to be part of this march for a prosperous Nigeria and Walk For A World class State should text name, LGA to 07069103274
POLITICS