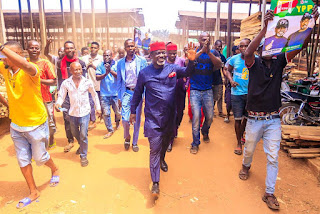 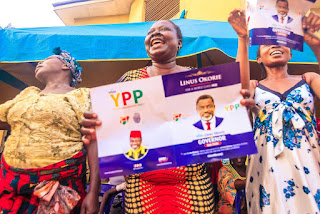 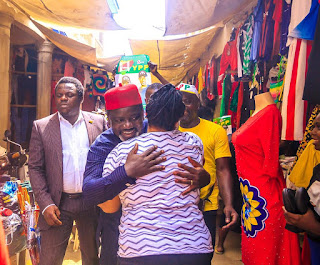 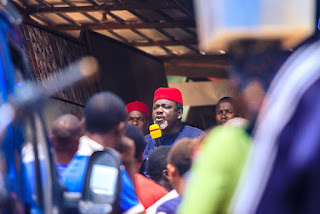 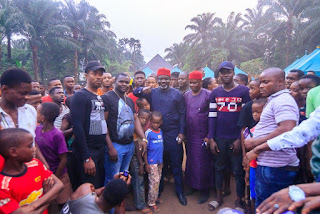 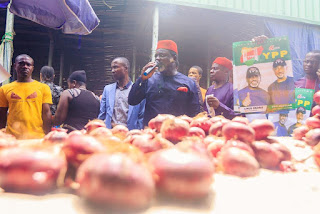 Linus Okorie, who hails from UmuEzike-Egbu Egbuoma in Oguta Local Government Area of Imo State is running for Imo Governorship Election under the platform of the Young Progressive  Party (YPP)
In his usual manner he stormed the market yesterday to the admiration of traders, onlookers and passerby’s who described him as the best option for Imo.
They expressed their unflinching support and assured him that they would cast their vote for the Young Progressive Party (YPP).
According to him,   the decision to run was born out of the  passion and desire to make a great difference in governance. the leadership coach  expressed his deep appreciation to the crowd who despite being  their at a  busy/peak hour with customers waiting their attention: They still came out in their numbers to welcome him and know his heartbeat for Imo.
The YPP Gubernatorial Candidate explained that  each electioneering year, politicians usually give out monetary inducement to the electorates with bogus promises which they don't have intention of ever fulfilling.
He said, "When a politician who is occupying a public office, steals your money and after four years gives you paltry sum to buy over your conscience. That is the highest level of insult. Igbo's are not beggers. "
"I  can tell you that it's about time we say No to money politics. Such politicians who does that doesn't have value for you and  would not perform because when he gets there, he/she would like to recover that Money, stealing more." 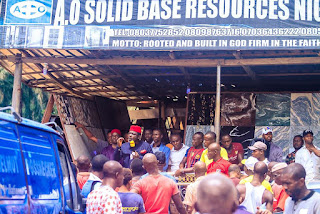 He also hinted that he will not give anyone money to vote for him but assured the people that his government shall put in place the enabling environment for business to flourish, interest free loan,  money would be in circulation to boost trade in the various markets and huge investments will also be made in human capital development.
He further stressed that there will be prosperity for all Imolites when elected as Governor because Imo belongs to all of us.
In his words,  ” Just like Dee Sam Mbakwe, I will be a great Governor for all Imo Citizens regardless of zones. I will make Imo a world class state filled with endless possibilities”.
In a similar event, Linus Okorie got an overwhelming endorsement when he visited Ngugu Ikeduru LGA. He was  well received by another group that consists of market men, women, youths, mechanics, tillers, farmer and all walks of life.
YPP Governorship Candidate assured them that his government shall also ensure that our people who are into Tilling, Furniture Making, Fashion Designing are well groomed so as to become exports to other parts of the world.