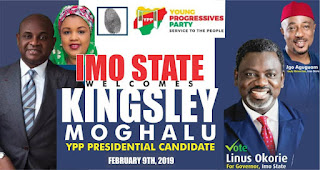 According to the former Deputy Governor of CBN and Professor turned politician:

"Nigeria is in a dire need of good quality leadership. We need good leaders that understand what leadership is about; it is about service not about being served. Its about having a clear vision and guiding people to the achievement of that vision. "

"I  have said it before and I will say it again, "The Presidency of the Federal Republic of Nigeria is a very SERIOUS RESPONSIBILITY and I AM READY for it and it is TIME."

DISTINCTIONS
o Ofﬁcer of the Order of the Niger (OON), Nigerian national honour conferred by the President of Nigeria
o Fellow of the Chartered Institute of Bankers (FCIB)
o Rotary International Distinguished Service Award
o Numerous other awards and distinctions

o Head of think and do-tank focused on policy development on inclusive economic growth, leadership and governance in developing countries and emerging markets.

TUFTS UNIVERSITY – THE FLETCHER SCHOOL OF LAW AND DIPLOMACY: PROFESSOR OF PRACTICE IN INTERNATIONAL BUSINESS AND PUBLIC POLICY – BOSTON 2015 - 2017

OFFICIAL MONETARY AND FINANCIAL INSTITUTIONS FORUM (OMFIF) SENIOR ADVISOR AND MEMBER OF THE ADVISORY BOARD – LONDON: 2014 TILL DATE

o Was head hunted to a new role, to raise funds and build public-private partnerships to combat epidemics of AIDS, TB and Malaria in Africa, Asia, Latam & the Middle-East.
o Designed risk management framework for the management of the $20bn Global Fund’s assets, social investments, resource mobilisation and partnership activities.
o Negotiated innovative $300m sovereign debt-for-health swap between donor countries such as Germany and developing nations such as Indonesia, Kenya and Peru.
o Created and established strategic, multi-sector partnerships to support the Global Fund, such as Friends of the Global Fund, Africa and South Asia.
o Inﬂuenced G-8 policymakers at the Evian Summit in 2003 to pledge $1.2bn to the Fund
o Led high impact road shows on the Fund’s work to US Congress, UK Parliament, private sector and the Ambassadors of the 5 UN regional groups of countries.

o Posted to bring the architects of the Rwanda genocide to justice.
o Negotiated legal cooperation agreements between the International Tribunal and UN member countries for the investigation, arrest and handover of high-level suspects.
o Communicated the Tribunal’s achievements via CNN, BBC and other global media.

o Assigned to stabilise the Serb-held areas of Croatia (Eastern Slavonia) after the wars of the FYR, organising the return of Croat refugees and organising UN-supervised elections.
o Built a comprehensive strategic roadmap for the UN mission, preparing for and supervising elections in the Eastern Slavonia part of Croatia.
o Negotiated a breakthrough to the stalemate between Serbs and Croats on the Electoral Commission, leading to peaceful and successful elections.

o Political analysis of conﬂicts in the UN’s remit, with reports for the UN Security Council.
o Participation in Secretary General’s Special Missions to Somalia, Angola and Rwanda.