A political revolution to take place in Nigeria - Kingsely Moghalu 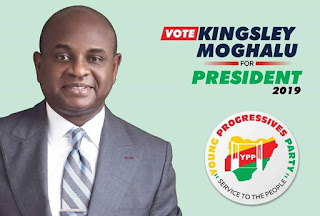 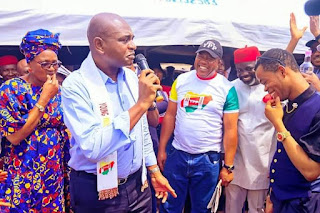 The former deputy governor of central bank of Nigeria and a presidential candidate of Young Progressive Party (YPP) Kingsely Moghalu who is a professor of economy at university of Nigeria Nsukka. 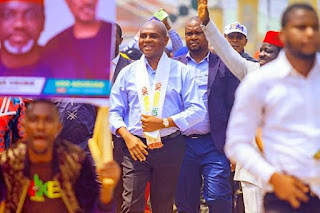 Moghalu said it is time for a political revolution to take place in Nigeria because we need leaders and not politicians to fix the economy of Nigeria. Our political system should be right before we can fix our economy.
I have been invited by united nation to fix the economic crisis of five different countries in Europe, Africa and Asia.

By 1990 there were bank collapse in Nigeria which led to loss of funds by customers in their various banks and now banks are reformed through the introduction of cash less policies, bank verification number (BVN) introduction of automated teller machines and point of sale (POS) in shops which was introduced by him.

Nigeria should not be ruled by vision-less leaders and yahoo boys like Muhammadu Buhari who have no certificate nor leadership charisma but Alhaji Atiku Abubakar who is a business mogul we must do away with PDP and APC because Nigeria have faced high rate of poverty and unemployment so there is need to rejuvenate the development centers through empowerment as well skill acquisition and promise to find a lasting solution to ASUU strike once he is voted in as the president of Nigeria because i love education.

There is nothing stated in the Nigerian constitution like zoning system so the south eastern states are promised to be given power by 2023 which we end up endorsing our oppressors through our political elite groups known as ohanaeze ndi Igbo which portray they selfish interest of the elites in the country and we cry of been treated like slaves and marginalized as cows have hopeful life than humans but we still have a president who makes flames excuses that he is technically winning the war against Boko-Haram without no show of dividend of democracy .

He was received by trade union leaders, association of disable, road transport workers, technocrats, students and his political supporters at the Dan-Anyiam stadium as he flag off his presidential campaign and presented the YPP Governorship candidate Dr. Linus Okorie , Aguguam Ugochukwu his running mate with the national assembly and state house of assembly candidates in YPP at the party secretariat at Okigwe road in Imo state and appealed to Imolites to support the Igbo presidential candidate with his vice presidential candidate Umma Getso come 16th of February 2019