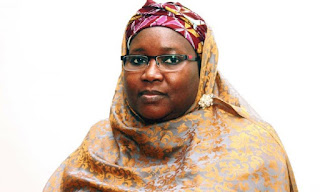 The Independent and National Electoral Commission (INEC), has appointed Amina Zakari as the head the collation centre for the 2019 general elections. Zakari is to head the committee on collation centre, one of the two committees for the election which the commission inaugurated today January 3rd.

Speaking during the inauguration of the committees in Abuja, INEC chairman Mahmood Yakubu, said the committees shall be responsible for the national collation centre which would be situated at the International Conference Centre, from where results of the Presidential election will be announced.

“It will serve as the secretariat for collation of results and venue for briefing of international observers and the media,” he said.
The former INEC Director of Operations, who hails from Daura, President Buhari’s hometown, was last year moved to Health and Welfare arm of the Commission. She was appointed acting INEC chairman immediately after Attahiru Jega's tenure expired. She was in office until the current chairman, Mahmoud Yakubu was appointed.


Controversy has followed the appointment of Amina Zakari who is believed to be President Buhari's neice, as the chairperson of the 2019 presidential election collation center committee.