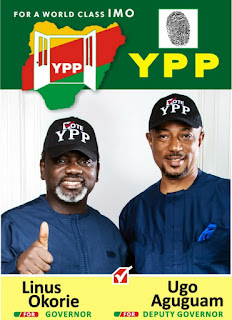 The social media news making the rounds that the Imo Guber flagbearer of the Young Progressives Party, YPP, Dr. Linus Okorie had withdrawn from the race to adopt another guber candidate has been described as total falsehood and work of mischief makers and enemies of better society in the state.


According to him “Our attention has been drawn to a fake social media news to the effect that some members of Young Progressive Party (YPP) in Imo State have gone to other Party without political structures and adopted a man rejected by Ndi Imo as their Governorship candidate. Our deep felt sympathies are with them.”

Mr. Anyanwu in the release added that “If any member of the YPP in Imo State went to any other party to pledge allegiance, we want to stress at this point that such a person does not represent YPP or Dr Linus Okorie because Dr Linus Okorie and the YPP leadership are in a constant struggle to discourage political prostitution otherwise known as “Ikwo-Ose” or “Stomach Infrastructure” which has kept the State at a stagnant position in the last 16 years.”

“Our belief is that there is no candidate who is a real match, in any shape or form, for Dr Linus Okorie in our campaign to build a world class Imo with endless possibilities. Our Obstacle In Imo State is primarily the curse of instant gratification. This is our real struggle”, he continued.

He charged the public to disregard such rumours and to note that YPP is the foremost and the most Credible Party not only at the National Level but also in Imo State with Dr Linus Okorie as the most accepted Governorship candidate who is head and shoulders higher than other candidates.

“It is equally important to note that hungry politicians are right now moving from Candidate to Candidate to see where there is enough “Ose” and if they find it in a camp that has no political platform, they would collect it; they are cheap.”

“Imo Governorship is not for the highest bidder, the earlier they know that the masses cannot be bought over, the better But the more troubling question should be, why YPP? If they are not afraid of Dr Linus Okorie and the ideology of YPP to make everyone count, why are they throwing so much money to stop him?”

“Let it be on record without any doubt, that Dr Linus Okorie is leading YPP to a landslide victory and all eyes shall see it. So anyone who has shown their spirit of “Ikwo ose” at this stage will have done our great party a great service”


“This 2019 election is a Vote for a Credible, God fearing, Capable and Visionary Leader and Imo people have discovered these sterling qualities in Dr Linus Okorie on the platform of the YPP. The man that has perfected the vision to make Imo a World Class State filled with endless possibilities through massive human capital development and youth employment, attraction of global and local resources, and unleashing excellence in governance leading to a quality, productive, robust and thriving economy for all Imo people.”
POLITICS