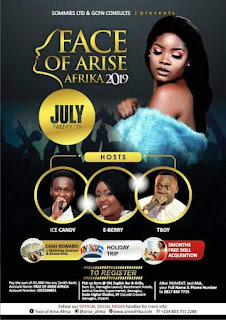 The audition  is billed for  next month February, 2019 at the #OldEnglish, 14 Item Street Ikenegbu Layout Owerri, Imo State, the organizers also revealed that the main event will be hosted by Hot FM trio Mc Tboy, E-berry and Ice Candy.

The pageant which is designed for young people between the ages of 18 to 28 years, is aimed at grooming youths towards a new order of projecting Nigeria’s Image and creating a platform for general entertainment. With the  winners becoming brand ambassadors of the Arise Africa Magazine.

The Chief Executive Officer of the brand, Mr. Ikechukwu Anyanwu said; “It is not just another beauty pageant, but a platform aimed towards inspiring and nurturing young, talented models as we seek to raise the beautiful continent of Africa”

“It is also another season to celebrate people, places and values during this season as special recognition will be given to distinguished personalities during the show ”
Forms for the pageant are out for Five Thousand Naira (N5,000) Only and could be purchased by making payment to the account details
Bank: Zenith Bank
Account Name: Face Of Arise Africa.
Account Number: 1015290631
or
Bank: FCMB
Account Name: Global Circle of Friends Network
Account Number: 0888625015
After payment, text FAA, Full Name, Phone and Teller no to 2348178497715
Hotlines are 08179497715, 08037512288
#AriseAfrika #Pageant
#Awards
ARISE AFRIKA MAGAZINE ENTERTAINMENT NEWS