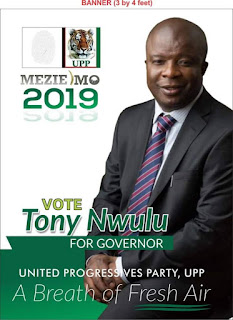 Hon. Tony Nwulu, a major contender for the office of Governor of Imo State on the ticket of the United Progressives Party (UPP) has vowed to bring unprecedented development to the state, if he wins the March 2, 2019 election.

"I will build a new Imo State which will be a pride of all of us. I urge you to join hands with us and rescue our dearly beloved state for 'A  Breath of Fresh Air'; for our sake, for the sake of our children and for posterity". "Imo State as I see it today is not what every promising indigene of the state wishes it to be. The Imo of our dream is an egalitarian state which guarantees equity,
fairness and social-justice; adequate security; socio-
economic growth, development and other dividends of democracy. But unfortunately, we have usually fallen into the incompetent hands of which majority of those
living within the state are glaringly suffering it today. I therefore, advise and encourage every Imolite - home and abroad to come together for us to save our beloved state." he appealed.

Promising to transform the state into the best in
Nigeria , he told the masses of in Owerri that Imo State is far behind what it should be.

"Therefore our people, it is time we all rise up and say again, 'enough is enough' . “We cannot continue to allow evil to thrive. 2019 is the right time for the system
to change ”.

Nwulu promised to build 'a new Imo State' that the
people would be proud of, if they vote for him in
the March 2, 2019 governorship election. “I urge you to join hands with us and rescue our dearly beloved state; for our sake, for the sake of our children and for posterity . Imolites shall have a breath of fresh air come 2019 ” he appealed.
The UPP governorship candidate told the massive crowd that if elected into office, he would guarantee quality education for Imo citizens from primary
school to university level; promote sports and
culture as a vehicle to creating jobs and recreation for the youth s ; make the state safe and secure; promote agriculture; make sure our retired fathers
and mothers do not continue suffering and dying out of hardship and nonpayment of their pension.

He also told the masses that he cannot forget the
widows and the poor; he shall establish and operate an accountable and transparent government that the
people can trust; make payment of workers’ salaries a first item in the budget and generally transform Imo State to the best in Nigeria, among other promises.

“It is heart breaking that there is no standard
government hospital in Imo State. No basic
amenities for the poor masses to enjoy the dividends of democracy. No quality sports facility and youth empowerment”.

Nwulu appealed to Imolites to remain patient, as the 'in-coming' UPP government has a clear programme to move the state forward.
“The people of Imo State are suffering in pains and
sorrow. There is no standard development. There are no standard motorable roads. Markets are not well developed. Infrastructure is in bad shape. Everywhere you go, Imo looks like a war zone, whilst our neighbours look different. Go to other States especially Ebonyi State of yesterday , and you
will see what is called meaningful development. But God has heard the cries of Imo people. That is why, I, Tony Nwulu and UPP, have stepped forward to lead our people to the Promised Land”, he declared.
Nwulu pledged that he will run a transparent and
accountable government; a government that is not
corrupt and not driven by the concept of god
fatherism or 'Familiocracy', but a "government of the
people of Imo State, by the people of Imo State and for the people of Imo State.” He assured that his government will not be "a family business” as it is in Imo State today.
POLITICS