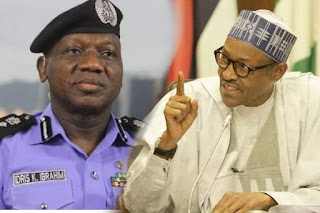 Coalition Of United Political Parties has instituted legal action against President Muhammadu Buhari and the Police Service Commission over what it tagged a plot to extend the tenure of the Inspector General of Police , Ibrahim Idris , by six months .

At a press conference in Owerri , the Imo state capital on Thursday ,the CUPP spokesperson , Ikenga Imo Ugochinyere , said that the opposition parties had it on good authority that the president wants to extend the IG’ s tenure , who is supposed to proceed on retirement on January 15 .

He accused the National chairman of the All Progressives Congress, Adams Oshiomhole , the Kano state governor , Abdullahi Ganduje , his Kaduna state counterpart , Nasir El -Rufai , the Minister of Transport , Chibuike Amaechi and Senator Godswill Akpabio as the ones leading the campaign for the IG’s tenure extension .

Flanked by the national chairman of the Action Alliance , Kenneth Udeze, Ugochinyere said that the legal action was instituted at the Federal High Court Abuja and marked FHC / ABJ/CS / 1570 / 2018.

He said that the CUPP is seeking the court ’ s interpretation on whether by the combined provisions of section 215( 1) of the 1999 constitution which provides that the appointment of a new IGP shall be made from among serving police officers and the provision of Rule 020810 of the police service rules which stipulates that an officer shall retire at the attainment of 60 years or 35 years in the force .

Ugochinyere said , “the IGP , who was born on January 15 , 1959 , and who by January 2019 will turn 60 and consequently cease to be a police officer can be reappointed as IGP in violation of the constitutional provision which clearly stipulates that only serving police officers are to be appointed.”

“ It is based on this that the suit is seeking a court declaration that IGP Idris is not eligible to remain in office after January 15 , 2019 , having attained the retirement age of 60 . ”

“ Also, for an order restraining President Muhammadu Buhari from reappointing or extending the tenure of the IGP beyond January 15 , 2019 .”

“ The issue of the retirement of the IGP is yet another integrity test for the president . By the provisions of Section 215(1 )( a) of the 1999 constitution , the IGP can only be appointed from among serving officers. ”

“ Any attempt to proceed with the plan for the secret extension of the tenure of the IGP will be unconstitutional, unlawful and unacceptable and will further heat up the polity . It will also further expose the President’ s desperation to win the elections by foul means .”

Ugochinyere said that if the president goes ahead to unlawfully extend the tenure of the IGP after January 15 , the Nigerian opposition parties would not recognise him as the IGP .

He said “Credible intelligence at the disposal of the opposition has shown that the National Chairman of the All Progressives Congress, Adams Oshiomhole , the governors of Kano and Kaduna States , the Minister of Transport and Minister Lai Muhammad and Senator Godswill Akpabio among many others are the chief proponents of this unconstitutional act and we advise them to apply restraint and desist from any further actions with potential to plunge Nigeria into crisis . ”