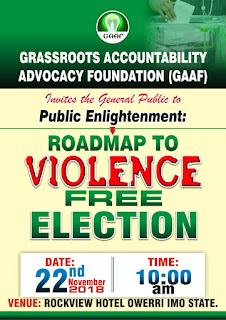 Grassroots Accountability Advocacy Foundation (GAAF) is mobilizing over 2,000 youths for nation-wide voters education. The youths  would begin  tour of local communities and shall be taking citizens on the issue of violence-free elections against 2019.

According to the President and Founder of GAAF, Genevieve Anthony-Iroajanma,  the event "Roadmap to Violence-free Election" would be a  nationwide enlightennent campaign and would flag off from Imo State on November 22. The initiative came with the increasing incidents of vote invalidations in the recently concluded elections in some states.

The scheduled flag off of the programme in Imo will bring together representatives of security agencies, the anti-graft agencies, Independent National Electoral Commission (INEC), Civil Society Groups, the academia, politicians and religious leaders, who would be speaking on the dangers of electoral violence.

According to Anthony-Iroajanma, cases of votes cancellations and attendant disagreements have posed a new challenge in the Nigerian electoral process, and this, she stated, required immediate attention.“We cannot therefore continue to stand by and watch as millions of uninformed, yet eligible voters are being alienated from the entire democratic process merely because of lack of knowledge of the voting and the whole electoral process
Events