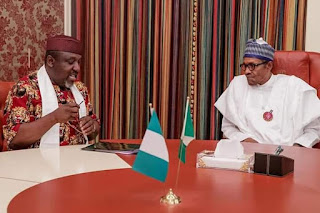 President Muhammadu Buhari and governor Rochas Okorocha of Imo state on Thursday met behind closed doors in Aso Rock over the crisis trailing the outcome of the All Progressives Congress governorship primary in Imo state.

The meeting which was called at the instance of the president was to proffer solution on the imbroglio affecting the conduct of the governorship primary of the party in Imo state ahead of the Independent National  Electoral Commission's deadline for the submission of governorship candidates names on November 2.

Buhari is presently presiding over the post APC primaries' crisis ahead of the electoral umpire deadline for submission of governorship candidates names.

Among the state enmeshed in the ruling party's post primaries' crisis, Imo,Zamfara and Ogun are the worst hit.

An inside source confirmed to our correspondent that the president who was conscious of the delicate nature of the crisis in the only APC controlled state in the south East zone,urged Okorocha to make sacrifices in the best interest of the party.

The source said that Buhari urged Okorocha who is the chairman, Progressives Governors Forum to drop his ambition to go to the Senate for one of the APC governorship ticket contenders in the state, senator Hope Uzodinma.

It was however unconfirmed if the governor agreed to shelve his senatorial ambition for the two terms senator.

At the end of the closed door meeting,Okorocha, told reporters that a former governor of Lagos state, Ahmed Bola Tinubu was not properly informed about how the national chairman of the party, Adams Oshiomhole, was running the ruling party.

Tinubu had opposed the call for the removal of Oshiomhole as the national chairman of the party.

Okorocha accused Oshiomhole of not carrying Buhari along in running the party.

He insisted that Uche Nwosu was the authentic winner of the APC governorship primary in the state.