Scarcely a fortnight ago, we read a piece titled "2019: Why Ndimo Must Reject Zenith Bank and Any Person From It," authored by Gift Okechimaghalam. In that inelegant piece, the Author laboured to spew phlegm on the glowing reputation of one of Imo State's finest - Sir Stanley Amuchie.

Our first reaction was that of a searing consternation. But after reading it twice and thrice, we resolved to discountenance it as those Beer Parlour musings of a man who had beguiled his long hours into moistening his tongue in gin. If otherwise, then the author may be writing for both fun and fund.

About 48hours ago, we again read another piece scripted in an inelegant prose, titled "Forgive Me, Today I Know More And Better." And quickly this caption calls to mind a verse in the Hymn, Amazing Grace - "I once was lost, but now am found; was blind, but now I see."

And so with glee, we want to welcome Gift Okechimaghalam to light and commend him for banishing the darkness that thickly swirled around his former realm. Welcome, Gift to the realm of truth and knowledge and light.

Thank you for disrobing the cloak of psychophancy and cladding yourself with the majestic garb of probity and objectivity.

Our attention has been drawn to Gift Okechimaghalam's recant and the mixed reactions that have trailed it on social media. So in the midst of the cacophony of voices saying "Gift was caught in the very act of defamation,"  and then Gift, weighed down and laden with guilt, casting a pitiful, remorseful gaze at us, we have decided to bend over, do a long unintelligible scribble on the ground, raise our head, look straight into Gift's teary eyes and say: Go and sin no more!

Gift Okechimaghalam's piece has refused to ruffle our feathers as Sir Stanley Amuchie's unassailable integrity, built and vigilantly maintained over the years, has not been and can not be blighted by any faltering pen.

He is a first class brain; a colossus that towers above his contemporaries; an astute Banker and Administrator who stands alone at the very pinnacle of his profession; a strong proponent of human capital development and empowerment.

Over the years, Sir Stanley Amuchie has displayed a genuine, consistent inclination for philanthropy; a gesture sparked by his peculiar circumstances as a growing child in the midst of lack. He floated, over ten years ago, an NGO called Goodlight Foundation. 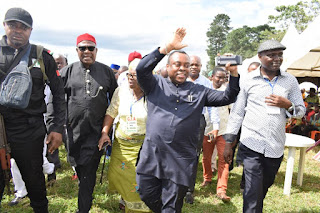 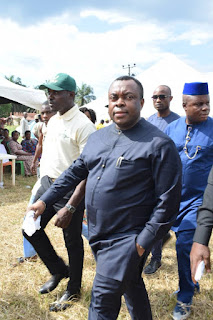 In an era where many individuals have flattered to deceive under the auspices of a Foundation, Stanley Amuchie has touched lives through Goodlight Foundation and has executed numerous community projects through same.

He has got the Midas' touch; evidently charismatic; disarmingly humble, unremittingly generous and stunningly sees in men, things they themselves have long lost. Like a fallen ember, he comes and ignites it and gives it breadth until it returns a blazing flame. This is exactly his mission in our State which can better be described as a fallen ember!

In the midst of this decay in this State, what we need is a seasoned Administrator in Douglas House come 2019.

In the midst of this darkness in Imo State, we need a dawn to end this long night of hunger, penury and rottenness.