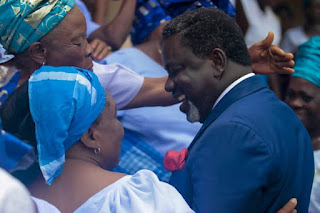 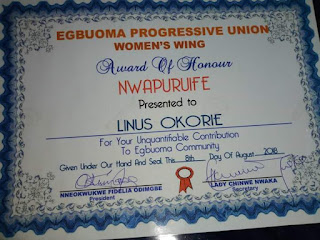 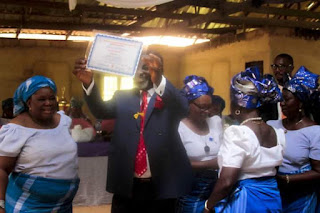 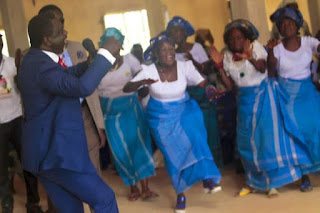 The colourful and memorable occasion did not end without leaving unending Joy in the hearts of the celebrants by the presence of their  beloved son who found time to be with them during the celebration.

It is indeed a day to remember as Egbuoma Progressive Union Women's wing conferred "Nwapuruife" title &  an Award of Honour to Dr Linus Okorie for his unqualifiable contribution to Ebuoma community.

In his acceptance speech,  the Egbuoma born leadership icon  revealed his plans to build a world class IMO filled with endless possibilities when elected as Governor.

He assured that women would be given adequate place in his government. There would  be favourable policies put in place like access to free antinatal, medical treatment, Rural  women would also be able to secure interest free loan to assist in their business, free trade zones and lots of other  people oriented programmes"

The movement is rising and increasing every single day. It is a movement that is changing hearts and minds of Ndi Imo to understand that "Imo Is Ours."  If Imo is to be totally beautiful to us and work for us, then all hands must be on deck.

Imo Nkeanyi is a People-Powered Movement Transforming the old ways of politics.
Dr Linus Okorie, with every stop in every village, community, town halls etc., has shown what he is made of; he listens and shares his vision of Imo state with Endless Possibilities and explains in details how it will be achieved starting from May 29th 2019.

His candidature is bringing a new dawning to individuals, families, groups etc., who have lived in dark shadows for too long because they are tired of politics and Politicians playing games with their future and the future of their children.

Many people who have no interest in politics as a result of long standing disappointments are rising up because they believe in what Dr Linus Okorie believes in- an Imo with Endless Possibilities.

Many Imolites we have spoken to are people who had never focused on politics before because they believed that Imo State was a "Private Company" and they have no place in it. Instead, they are focused in fighting battles that loomed more immediately in their lives- hardship created by politicians to keep them occupied.

Despite the hardship brought on Ndi Imo in the last 7 and half years, we are still living in an exciting period in Imo state as well as a  frightening one.
A State With Endless Possibilities means a state that will shift from constructing poor infrastructures, joblessness, mismanagement of public funds,  to one where ideas and policies will bring about industrial growth and a life-sustaining economic growth.

The people of Imo state have reason to be optimistic.

Across the communities and local government areas across Imo state, and in cities across Nigeria and beyond, where Ndi Imo live,  people are joining together and coming together to resist the ills of the last 7 and half years in Imo state from being renewed.