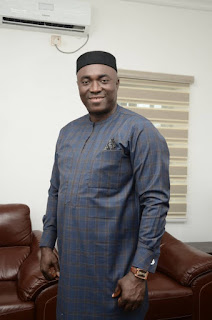 Profiling a man like Enyioha Chris Anyanwu is a difficult task. Perhaps Shakespeare foresaw him before writing that "there is no art by which the heart can be read from the face"

So from a distance to a stranger  he may appear too tough, intimidating and unapproachable.

That is far from the truth.  It is like the proverbial blind men that touched different part of an elephant and each had a different tale when they were asked to describe an elephant.

He is a great  achiever, icon, mentor and great leader

Enyioha Chris Anyanwu would on 28th July at Rockview Hotels Owerri be honoured with Ambassadorial Service Award  as a result of his selfless service and contributions towards nation building.

Congratulations Mr President from all of us at Face of Arise Africa.

Enyioha Chris A. E. Anyanwu is a graduate of Imo State University 1999 set. He studied Religious Studies with Second Class Upper Division. While in the University as a student, he was the Course Rep from year one to Final year because of his leadership skills. He was a great footballer who played both for his college and the School Team and was admired by Fans who nick named him ENYIMBA.
He was the Rotaract Club President of Imo State University in 1997/98 Rotary year Called Dream Year. He worn award in all the Seven Avenues of Services for the Rotaract Club of Imo State University both International award from Rotary International, District and State awards. He also received an award from Rotary International as the best Rotaractor President in Nigerian 1997/98 Rotary Year. The Rotaract Club of Imo State University under his Leadership was adjoin the best Humanitarian and Social Club on Campus in 1998. The Rotaract Club of IMSU was in 1998 awarded the Best Institutional Base Club in Imo State under his leadership; and because of his leadership role the Mkpoko Igbo Social Cultural Organization  Under the Leadership of Comrade Martins Opara of  Imo State University gave him a Chieftaincy title  ENYIOHA 1 OF Imo State University.
The call to serve his Fatherland took him to Brigade of Guards Headquaters Asokoro Abuja and after a successful National Youth Service, he joined Revilo Aerospace Corp as an Executive Marketing Officer in 2000. In 2005 he joined Diversified Richfields Limited as a business development Manager; the company took him round the Globe. In 2010 Chris Joined Greenprofit Trans-Global Limited a Subsidary of Tenderex Group Limited  in the Oil and Gas, Financial Services as well as Logistics, as the General Manager.
He is a passionate, experience and goal oriented professional who have distinguished himself in the Aviation, Oil and Gas as well as Haulage Sector.
Due to his love for Academic Excellence, he instituted a yearly award/prize of N100,000 (One hundred thousand naira) to be given to the best Graduating Student of the Department of Religious Studies, Imo State University since 2015.
He has empowered windows and given free Education to University students within and outside his hometown.
Chris is married to Bar. (Mrs) Chisa Blessing Anyanwu (Nee Ogwurike) and the Marriage is blessed with two Children, Chidera  and  Chikamso
AWARD RECEIVED
Asaigbo Foundation, Igbo Merit Award 2015, as the Most Distinguised Young Igbo Person of the year 2015, for his numerious contributions to the course of Ndi Igbo and humanitarian per excellence.

Achiever of the year – by Rotaract club of Imo State University 21st August 1999.