Ihedioha: Why I Championed the Inclusion of Special Citizens Group in the PDP Constitution. 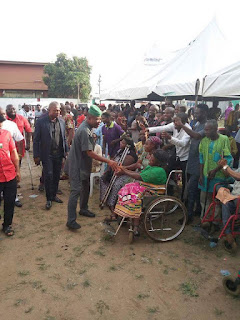 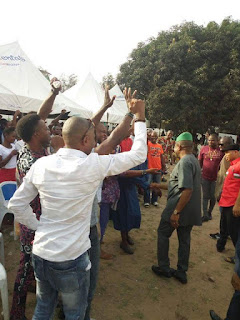 …Donates Cash and Operational Vehicle to the Group

Former Deputy Speaker, House of Representatives, Rt. Hon. Emeka Ihedioha CON says the provision of the Special Citizens Group (persons with disability) in the recently amended Constitution of the Peoples Democratic Party, PDP was to reflect the inclusive ideology of the party as truly the People’s party.

He stated this, at the inauguration of the Special Citizens Group of the PDP, Imo State Chapter, held at the party Secretariat in Owerri, Sunday.

Speaking at the colourful ceremony, Ihedioha said, “I am the happiest person today, seeing our dream to truly reflect the inclusive ideology of our great party, come to pass. As Chairman of the Constitution Review Committee of our party that was saddled with the responsibility to alter and amend our constitution, I led the recommendation of this special group and indeed ensured that we backed the Special Citizens Group with a constitutional provision, to protect and give our brothers and sisters the confidence to participate in democratic activities without, any form of complex, fear of intimidation or exclusion.

“Now that you have been inaugurated, I want to urge you to hit the ground running and aggressively mobilize other special citizens who are desirous of being a part of the movement to liberate our dear state from bad governance. We cannot afford to relax because there is no time. We have a lot of grounds to cover,” he said.

“I want to commend our Chairman, Barr. Charles Ezekwem and the entire members of the executive for this feat under your administration. It is indeed a loud statement to the fact that we are getting it right and that our party is poised to taking over Douglas House come 2019.”

The frontline PDP governorship hopeful, announced cash donation and a brand new 15 seater bus to the group. This, according to him,  “will aid their task of effectively mobilizing the base of the party and other relevant areas for the battle ahead.

Earlier in his address, the Chairman of the Group, Chief Ikechukwu Onye, thanked the leadership of the party for the rare opportunity to participate in the process and expressed their readiness to contribute meaningfully to the realization of the party’s aspirations.