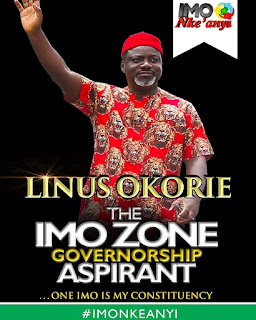 We will put an end to money politics in IMO

We will move as a 30,000 member group to join any political party- Linus Okorie


Dr Linus Okorie, a foremost governorship aspirant in Imo State on Monday 16th April, 2018 was a guest on  My Radio FM Owerri and he spoke at length on the party he will run under for the governorship race, zoning and the visions of the Imo Nkeanyi Movement.

On his vision:
"My vision is to build a world class state filled with endless possibilities "
On Mission:

"Our mission is to  model a world class Imo filled with endless possibilities through massive human capital development and youth employment, attraction of global and local resources and unleashing excellence in governance leading to a quality, productive, robust and thriving economy for all Imo people "

On the party he”ll join:

"I would announce shortly the party"

“Before any progressive joins any party, he must do his consultations well and in a powerful way so that he does not make mistakes. You need to understand one thing about most of these big political parties. Most of them are so big and they all have a particular culture. The delegates are already waiting for politicians to come and bring money.what they call:  “Ikwo Ose”. This is one of the problem. Once that happens it  throws up the wrong candidates for elections. We don’t want to get into all that. The day I am going to announce my political party, the whole Imo State would certainly know and we are putting a stop to money politics. We would move as a 30,000 member group to join the party. And would make a difference.”


Politics is a game of sentiments and when it is thrown up, a lot of people start reacting. Zoning is one sentiment that has been a recurring decimal. There is a view from some quarters that certain zones has had more slots than others. So  should be reserved for Owerri zone. What is your stake on zonning?

"I Linus Okorie,  I am from Imo Zone.  I am not a candidate that would thrive from a particular zone. My zone is Imo. Former Governor Mbakwe of blessed memory did not consider zoning while he held office as the Executive Governor of Imo State. Mbakwe hailed from Avutu, Obowo yet he really worked for the development of the entire Imo State and it showed in his workings. I would like to tell you that once someone comes and is a performer, nobody cares about which zone he’s from.”

On the Imo Nkeanyi Movement:

“It is actually called Imo Nkeanyi. This is a concept that says this Imo is ours. Imagine whenever you refer to Imo State as our own. It signifies that Imo belongs to all of us. Not a particular family, group of persons or zone. There is so much love associated with this ideology. Whenever “Imo” is mentioned, there is a sense of love, attachment and you would not think of anything going wrong in the state. Nobody is thinking you are from Okigwe, Owerri or Orlu. I believe all of that is really causing division amongst us. We know that for a long time, Imo State has been deprived of quality leadership capital. This has caused us a lot of poverty, shame and disgrace across the world. A lot of people are dissatisfied with what is going on. A lot of people are challenged by what is going on. Imo is missing a lot. People are no longer proud anymore to be from Imo. Almost all the people who occupied leadership positions in time past have been thinking about themselves. Its all about satisfying their selfish interest, personal aggrandizement, empowering only themselves and those related to them. They are forgetting that there are Imo people who are living in the villages. These people are suffering every day. It is on the basis of the above, we came up with an ideology that says this Imo must be restored.”

"It might interest you to know that for 24 years of my life, I have been in the business of developing the leadership capital of Nigeria.  We have been developing leaders. We have also gained global recognition in what we have been doing over the years. We have been honored by top institutions of the world including the US Government. So having become successful in training and developing people, my thinking ;  it is  time to come back to Imo to model a world class Imo filled with endless possibilities

On Making A Difference as a Governor:

Absolutely your concerns are correct. I would make a difference because of my antecedents and track records. I love the state. I went through Government College Owerri where I became the senior Prefect and I made a huge difference.  I was also the first elected Student Union Government President of Imo State University. For years now, my job has been to mold and develop leaders. I am coming to Imo State to set the standards and ensure that people come out of poverty and there is prosperity in Imo State"

In conclusion,  he said

"If a man does not have a purpose of waking up, sleeping becomes quite interesting.
Imo Nkeanyi is  wake up call for all Imolities