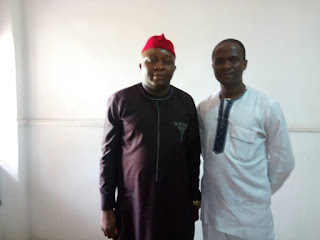 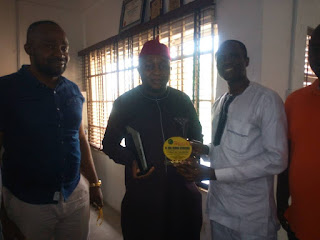 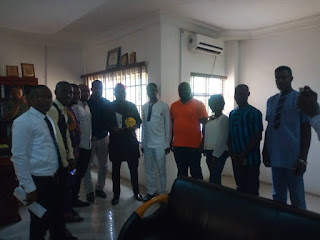 The letter of nomination from the organization notifying him of his selection for this prestigious honour which was put forward and after acknowledging the organizers put up a website where Imolites voted massively for him because he has distinguished themselves as a Proactive Lawmaker wining the Awards for two consecutive years. 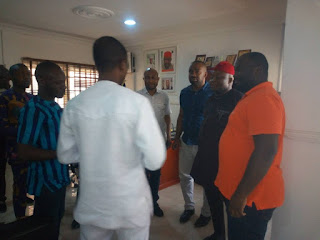 The event which held last year at Benchmark Hotels , Owerri had several distinguished personalities recognized and it's set to hold later in the year.

Speaking today at the Imo State House of Assembly, the deputy speaker appreciated leaders and members of the Arise Afrika for finding him worthy. 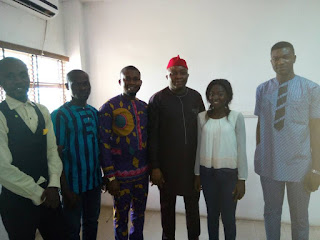 PROFILE: Rt Hon. Ugonna Ozurigbo (Enyioha) was born on 26th November, 1977 to the humble family of Chief & Lolo Donatus Ozurigbo of Umudurueze Umuozu in Nwangele Local Goverment Area of Imo State, Nigeria. He is the Fifth child of his parents.
EDUCATION:
Born without a silver spoon, Rt. Hon. Ugonna Ozurigbohad his Primary School Education at Ikenegbu Primary School Owerri from 1983 to 1989. Without delay, he commenced his Secondary School education in 1990 at Government Secondary School Owerri and successfully graduated in 1995 with Senior Secondary School Certificate.
In 1995, he defied the routine one year of internship for young senior secondary school leavers and began his tertiary studies at Federal Polytechnic Nekede, Owerri in 1995. In 1997, he graduated withOrdinary National Diploma (OND) in Business Administration.
With the academic curiosity of St. Aquinas, he further enrolled into Abia State University, Uturu, in 1998, where he obtained his Bachelor of Science in Government and Public Administration in 2002. Soon thereafter his graduation, he was enlisted for the National Youth Service in 2004. He served as a Corps member in Ogun State of Nigeria and meritoriously passed out in 2005.
During his days as a student, he had at different times held the positions of:
a.    Student Union President Abia State University, Uturu
b.    President Nigerian Catholic Students Fellowship ABSU Chapter
c.    Director of welfare Student Union Government ABSU
d.    Director of Socials Student Union Government Poly Nekede
e.    National President Nwangele Students Association

BUSINESS:
Propelled by hard work and the desire to be self reliant, Rt. Hon. Ugonna Ozurigbo (Enyioha) rejected white collar job and went into private business as an airtime and mobile phones distributor, after school. As providence will have it, it did not take him long to demonstrate wit and make his mark in the telecommunication industry. Today, he has established the most reliable communication outfit in Imo State, known as OZB Communication Ltd; also reckoned with all over Nigeria.
As a business guru with a broad mind for growth, he further expanded his business tentacles into the hospitality business and Agriculture. His multiple ventures include Kelvic Suits& Towers Ltd, Victory publications Ltd, Kelvic Farms, Kelvic Fast Food, and etcetera.
POLITICS:
Rt. Hon. Ugonna Ozurigbo (Enyioha) forayed into active politics in 2007. He introduced the concept of politics without bitterness in Nwangele political milieu. He demonstrated astute political followership and humility; traits which has continued to endear him to the masses and the political elites. He is a good party man with a stint of die hard followership. He is presently a chieftain of All Progressives Congress Party in Nigeria (A P C; the ruling party). He has built a political bridge that cut across all the Local governments in Imo State.
In 2011, with the help of God Almighty he was elected member representing Nwangele State Constituency in the Imo State House of Assembly. He was generous with his position and was never cocooned by the paraphernalia of the offices he occupied.
In 2015, he was re-elected again based on his performances, pace setting achievements and for the faith he kept with Nwangele people. Since being a legislature in the Imo State House of Assembly, he has being part of the leadership of the Imo House of Assembly. He has occupied many offices in the Imo House of Assembly which includes;
1-    Deputy Speaker Imo House of Assembly         (Current)
2-    House Committee Chairman on Religion        (past)
3-    Majority Chief Whip Imo House of Assembly          (past)
4-    House Committee Chairman on Public Utilities        (past)

SOCIAL LIFE:
He is one among the most accessible politician ever known to mankind. He has a listening ear with helping hands. Rt. Hon. Ugonna Ozurigbo is a philanthropist per excellence.He has the Chieftaincy title of Enyioha from his own community, Umuozu Autonomous cob mmunity Nwangele L. G. A. of Imo State, which goes to demonstrate his acceptability by his people.