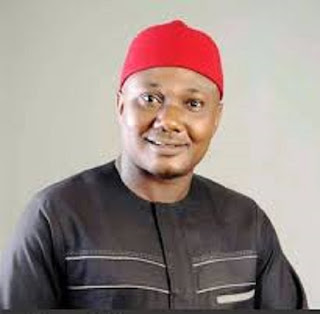 The people’s Democratic Party has declared as vacant the seat of the lawmaker representing Ohaji/Egbema state constituency of Imo state, Emma Orie, who jumped the opposition party for All Progressives Congress .


Addressing journalists in Owerri shortly after the declaration ,the Publicity Secretary of the PDP in the state,Damain Opara vowed that PDP would recover the seat .

According to the PDP spokesperson, the party would do everything legally possible including going to court in making sure that Orie loses his seat at the state house of Assembly .

On the allegation that PDP is doomed ,Opara said “the statement by the lawmaker shows that he is a drowning man.he was a big liability to the PDP .

under his watch ,Ohaji/Egbema LGA ,which is one of the only two oil producing LGAs in the state has been shortchanged by the Imo state government.

His emergency in 2015 as the candidate of the party was as a result of impunity and imposition in PDP then. we are going to write to the national leadership of our party to begin the process of retrieving his seat for our party. He went to the house with our mandate. So his seat belongs to the party
Gist