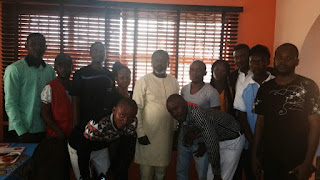 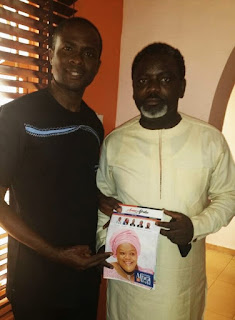 Leadership expert and 2019 gubernatorial aspirant in Imo State, Dr. Linus Okorie has said that Imo State has never had a good leader since the days of Mbakwe because none of the former governors of the state has cared so much about leadership

Dr. Okorie who is  referred to as  ‘Master Leader’ made the statement in Owerri, Imo State  on Valentine’s Day, during a meeting with members of Imo State Bloggers Association ISBA, where he added that he has spoken about leadership for 24 years across the globe and it is time for him to model it in Imo State.

Having been a facilitator in leadership trainings for politicians, military and other organizations, Dr. Okorie referred to himself as the ‘Master Leader’, adding that if it is easy for him to turn other people into great leaders, it would be easier for him to transform Imo State with the experience he has gathered in the last 24 years.
assuring members of ISBA that he has what it takes to empower the next generation and turn the fortunes of the state around for good, the renowned public speaker said; “the pursuit of leadership development has eaten me up; I wake up and think leadership; I sleep, I dream leadership; I wake up again I act leadership. Everything about me is how do I invest in the new generation of leaders?”

Imo has never had it great, maybe in Mbakwe’s period, but beyond that, it’s been from one challenge to another and a lot of people don’t care about leadership and making a difference”

Declaring that he wants to show Imolites what leadership is all about by transforming the state, he said; “I want to transform Imo, so that when I am done, I can tell the story of how it happened. I have talked for 24 years and now I want to do. I have created leaders for 24 years and I want to deploy those leaders

To model a world class Imo filled with endless possibilities, through massive human capital development and youth employment, Dr. Okorie said that through the attraction of global and local resources he will drive the economy of Imo State in way that everyone will remember that a ‘Linus Okorie’ has come in as governor.

He noted that he is running  to win the election.

Mr Ikechukwu Anyanwu, Publisher of Arise Afrika Magazine presented a copy of Arise Magazine to the foremost Leadership Coach who had won several international recognitions as a result of his proven track record in Human Capacity Building, Motivational and inspirational messages.


Speaking for ISBA, the president of the Association, Comr. Chinedu Hardy Nwadike hailed Dr. Okorie as a great son of Imo State, adding that ISBA which is apolitical, is to make sure that people around the state and beyond are properly informed especially as it concerns every aspirant in Imo State.

ISBA wished Dr. Okorie well in his aspirations, assuring him that ISBA is always open to work with everyone irrespective of their political inclinations and aspiration.

Dr. Okorie has launched the Imo Nkeanyi  Movement and also has been mobilizing. He  would be releasing a blue print of how he would be transforming every sector in the state
Gist