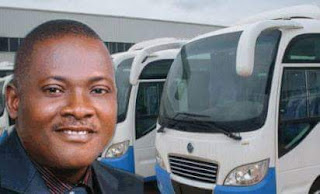 According to Ekweremadu, Chief Innocent Chukwuma was arrested by officials of EFCC who stormed his home in Enugu about 5am on Tuesday and then whisked him away without being told his offence.

Ekweremadu believes the arrest of Chief Innocent Chukwuma is in flagrant violation of his liberty as a free citizen guaranteed in the Nigerian Constitution.

Chief Innocent Chukwuma was allegedly arrested by EFCC over a transaction between him and a commercial bank, Guaranty Trust Bank (GTB).

Ekweremadu who said he spoke with Chief Innocent Chukwuma told Senate that the business mogul is not indebted to the bank; pointing out that he has since repaid the loan he collected from the bank

Ekweremadu said it GTB that is in fact owing Chief Innocent Chukwuma after it (GTB) over deducted up to the sum of N500 million from his account.

He said problem started between Chief Innocent Chukwuma and his banker after he demanded refund.

He said while GTB was willing to pay at 7% interest rate, Chief Innocent Chukwuma insisted on collecting same 22% interest rate the bank had charged him.

The transaction has been a matter litigation, pending currently at the Apex Court.

Ekweremadu appeals strongly to Senate to intervene to ensure that Chief Innocent Chukwuma is propmtly released, wondering why EFCC or any other security agency should involve itself in matters already at the Supreme Court.

The EFCC had on its Twitter handle said it arrested Chief Innocent Chukwuma because he refused to honour its invitation.

Senator Enyinnaya Abaribe believes the what EFCC said is not true; questioning how commercial transaction between the man and his bank became the business of EFCC.

He condemns the invasion of the home of the business tycoon and the allegation that his wife was slapped by officials of EFCC when she dared to ask why they came to arrest her husband.

He wants EFCC excesses checked especially under an Acting Chairman, Ibrahim Magu who Senate had refused to confirm.

Senator Bernabas Gemade (Benue Northeast) also condemns the arrest describing it as an abuse of power and privilege by Chief Executives of banks.

He supports the immediate release of Chief Innocent Chukwuma; advising GTB to follow due process where it feels aggrieved.

Speaking, Senate Chief Whip Sola Adeyeye expresses disappointment at a growing trend of assaulting the liberty of free citizens which he said is a major threat to Nigeria's democracy.

In his contribution and before putting the question, Senate President, Bukola Saraki advises EFCC and other security agencies to operate within the armbit of the law.

Committee on Anti-Corruption has 24 hours to investigate and report back to Senate on the matter.