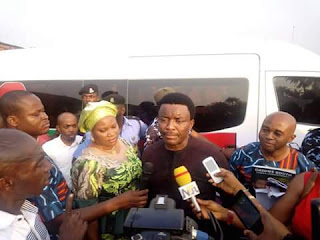 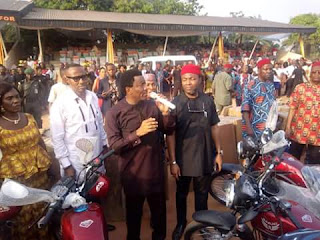 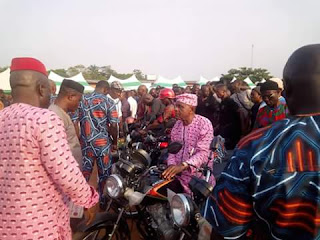 The Publisher of Arise Africa, Ikechukwu Anyanwu, has expressed satisfaction at the level of representation being pioneered by the member  representing his people at Okigwe South Federal constituency in the House of Representatives, Hon Deacon Chike Okafor. He commended the lawmaker as  the official flag off  of Hon Dcn Okafor's free medical/empowerment outreaches and Constituency Briefing, held at Otoko Obowo LGA. 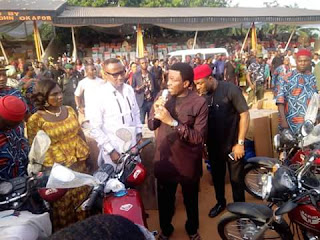 The Governor of Imo State was ably represented by the Secretary to the Government of Imo State Sir George Ezenna Eche, who also thanked the Hon member for what he described as people oriented programs and policies being anchored by him.
He said,if what is being witnessed here today is replicated by others, the State will be better for it. 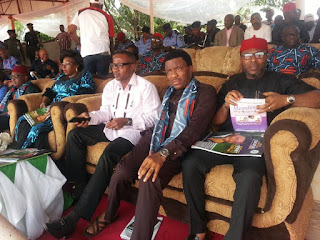 According to the Imo number one citizen, the initiative to embark on a free medical outreach which is not the first of its kind by Hon Okafor,is a clear testimony to a collaborative effort by my government in improving on the health delivery system in the state which is encapsulated in the building of 27 general hospitals in the state and other primary health care centres,to mention but a few.


Furthermore, in his remark, he  urged the youths to use the empowerment materials and equipments to better and advance their means of livelihood.


Earlier in his remarks, Hon Dcn Okafor thanked the Governor for his fatherly care and advice and for deeming  it necessary to identify with him and his constituents at this momentous occasion. He said that he is only inspired by the Governor's philanthropic gestures and sees him as a role model per excellence.


He thanked his people for the unalloyed confidence and support which they reposed in and continue to give him. He said the health of his people is of great concern to him hence the annual outreach.
He beckoned on the State government to keep including his constituency in the scheme of things.


While also admonishing the youths to continue to support the government of the day in their bid to turn around things for good, he assured them of continued effective representation at the lower chambers of the National Assembly.
He distributed 31 number each of motorcycles, sowing machines,grinding machines etc to be giving to to winning beneficiaries from all the 31 electoral wards of the federal constituency,using the Owelle formula.


Dignitaries from all over the country were I attendance including the Wife of the Governor of Imo  State Her Excellency Ugo Nneoma Dr Nkechinyere Rochas Okorocha,represented by the Hon Commissioner for Health Dr Mrs Angela Uwakwem,Hon Minister for Health Prof Isaac Folurunso Adewole,ably represented by the Chief Medical Director, Federal medical centre Owerri Dr Achigbu Kingsley and an array of Hon members from the National Assembly including top government functionaries,too numerous to mention.

Hon Deacon Chike Okafor is the house committee chairman on Primary Health Care Services amongst other committees where he is either a vice chairman or a member, in the House of Representatives,and of the APC extraction.