Who is Ellen Johnson Sirleaf ?

WHO IS ELLEN JOHNSON SIRLEAF? (1) 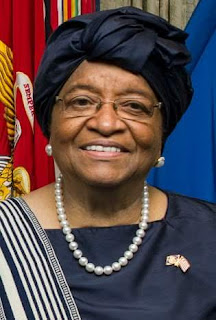 Birth/Parentage:
Sirleaf was born in Monrovia to a Gola father and Kru-German mother. She was educated at the College of West Africa before moving to the United States, where she studied at Madison Business College and Harvard University. She returned to Liberia to work in William Tolbert's government as Assistant Minister of Finance from 1973–74 and Minister of Finance from 1979–80. After Samuel Doe seized power in a coup d'état and executed Tolbert, Sirleaf fled to the U.S. She worked for the World Bank before moving to Nairobi, where she worked for Citibank and then the Equator Bank.

After returning to Liberia, Sirleaf ran for office, placing second in the 1997 presidential election won by Charles Taylor. She won the 2005 presidential election and took office on 16 January 2006. She was re-elected in 2011. In June 2016, she was elected as the Chair of the Economic Community of West African States, making her the first woman to occupy that position since it was formed.[1]

In 2011, Sirleaf was jointly awarded the Nobel Peace Prize with Leymah Gbowee of Liberia and Tawakkol Karman of Yemen. The women were recognized "for their non-violent struggle for the safety of women and for women's rights to full participation in peace-building work."

Sirleaf was conferred the Indira Gandhi Prize by President of India Pranab Mukherjee on 12 September 2013. As of 2016, she is listed as the 83rd-most powerful woman in the world by Forbes magazine.Source:Wikipedia