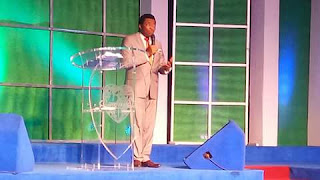 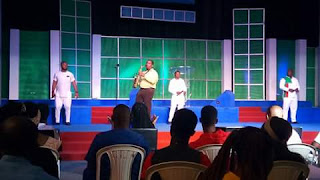 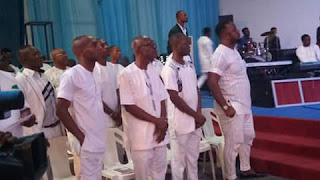 Today was indeed an awesome time in God's presence. Hon Deacon Chike Okafor is  mightly used by God to minister. I am always inspired each time I sit under the anointing, listening  to this great man of God. Hon Deacon Chike Okafor is the Honourable member representing Okigwe in Federal House of Assembly, A crowned Prince of Umuokeh Autonomous community in Obowu LGA,  Imo State.

One of such occasions is the exceptional Men's Service that took place at Christ Embassy,  Onitsha Road Owerri, on 22nd of October 2017.

The service was hosted by the men and was indeed a power packed one. Hon Deacon Chike Okafor spoke extensively on *Growing Into Sonship*

The service which began at 8.30 started with Opening prayers by Bro Norbert, worship by Bro Okay Anya and praise lead by Bro Kyze.

The heated praise and worship session turned the congregation into a  joyous celebrations.
The men were all dressed up in white and in no distance time were ushered to sing as they majestically mounted the stage to render their melodious songs.

A video clip on Inner City projects was played, as several widows testified how their lives has been touched by the ministry of Pastor Chris Oyakilohme

The men's week and service was indeed extraordinary. The whole church was filled with the glory of God as we had one activity after another rolled out sequencially and in an organised manner.

Next was a 4 man panel of discussion which centred on the role of men, giving. Panelist were Pastor Aneke,  Hon Chika Madumere, Bro Ethelbert,  Bro Charles Ukawuike.  Men ought to be the priest of the home and live up to the responsibility. According to Hon Chika "any man who is not able to take care of the home is worst than an infidel. Need to be sensitive to the needs of God in the church. We should learn from the woman of Zaraphet who gave to the prophet even though it was the last thing they had, it was the giving that gave the family the needed miracle.

The men's choir thrilled the congregation as they all re-echoed during the guard of honour of the soldiers of the cross.
We Rule
We Reign
We King
We Spread
We Flourish

The drama group mounted the stage to present a short drama.

Hon Deacon Chike Okafor speaking from Acts 20:32 which says:
"And now,  brethren,  I commend you to God and to the word of his grace, which is able to build you up and to give you an inheritance among all them which are sanctified."

He also sited Rom 8:12 and Lk 1:80  saying  _"when I joined the church, I came as a child. I came with nothing, poor, without wife, without child. but today I make bold to say that I am influential. I am rich. Before you get it all wrong and say he is proud. I am not merely boasting.... my boast is in the Lord._"

Speaking further he illustrated his point from the scriptures that when Jesus was born, it was the Angels that announced him. But he had to pass through a process to be matured. After he had attained the right age,  as he went to be baptised by John,  God Himself announced Jesus. He continued _"God created me for a show. That is why I can't be hidden. That is why I can't keep quiet. The essence of our being manifested is to go out to the  world and manifest_".

Furthermore he said, God manifest Sons and not babies. The challenge is how we can grow into sonship. Jesus was building capacity to receive what God had in store for him. Taking his text from Lk 2:40.
_It is one thing for you to grow and another thing for the  growth to be sustained_ - Gal 4:1-7, Acts 20:32

Hon Deacon Chike Okafor went ahead to say that growth is a process.
1 Peter 2:2. And he listed that for you to grow the following is required : Prayer, Word of God, Giving, Boldness.

*Prayer* & *Word*
Prayer would give uyou more anointing, gift and the word will establish you in character.
Hebrew 5:14, Ezekiel 2:2
God's word is our builder. If you think my life is inspiring to you, it is because of the word of God

*Giving*
On giving he said "Until you grow to the point where you can't draw the line between what you have and the need of the kingdom. We are mere custodian of all the  resources God has given us and it is for the kingdom. Prov 11:25, 2 Corinth 8:7-9. We grow through our giving, we become great through our giving. Abraham is a good example he gave God sacrificially. He spoke on various types of giving and shared testimonies of how God made provisions for the vision and someone who was owing him for a long time paid him. And when it came, he quickly ran to fulfil the vow he made to God.

Lastly on boldness. He said "you don't just say I know who I am as a child,  the enemy would certainly blow you off your feet but when you say it as a son heaven backs you up.
When you know God, you would demonstrate sonship.

Responsibilities are not given to children  but to son. So grow up. The pastor would not grow you. But you have to make conscious effort.

After the ministration of the word by Hon Deacon Chike Okafor,  the set man of the house Pst John Amenkhienam made alter call and led many to Christ.  He urged all men to come out for prayers. Declaring God's blessings on all. It was one of the finest outings indeed. An Exceptional service