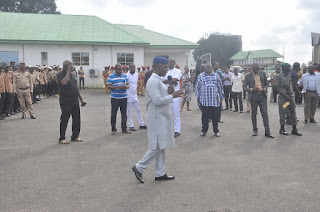 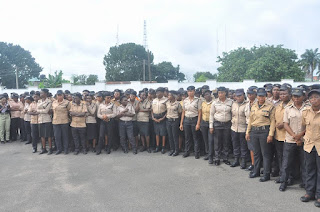 GOVERNMENT OF IMO STATE
PRESS RELEASE
IMO GOVT READ RIOT ACT TO STREET TRADERS, OKADA RIDERS, OTHERS
… GIVES ENTRACO, CIVIL GUARD MARCHING ORDER ON FULL IMPLEMENTATION OF BAN
Imo State Government has given a marching order to Imo State Environmental Transformation Committee (ENTRACO) and Imo State Civil Guard to embark on full and comprehensive implementation of ban on street trading, motorcycle riding within the metropolis, illegal parks, among others.
Addressing leaders and members of the two agencies in Government House, the Chief of Staff Imo State Government House, Ugwumba Uche Nwosu made it clear that they have not lived up to expectation in strategic areas of the state, street trading on the increase as well as illegal motor parks when the state has ENTRACO and Civil Guard.He charged them to be diligent and dedicated to their duties so as to justify their salaries.He called for the posting of more male personnel to traffic posts and advised them to always dress decently and smart while on duty and to sustain government's urban renewal policies. 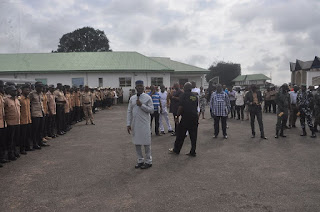 He informed them that different sub Committees, headed by some aides of the governor have been formed for the total and comprehensive eradication of the above mentioned anormalies
He advised them to work closely with the committees to ensure success of the exercise.
" Urban renewal has come to stay. Civil Guard and ENTRACO have important roles to play to ensure the success. Street hawking, Okada riding, Illegal Motor parks are no longer accepted anywhere in Owerri Metropolis. We have more than enough market and shops at different locations to accommodate all traders in the state”.
Though he advised them to apply human face and be Civil in their approach, he equally advised them that after the initial warning, if the only thing that will make the offenders to obey was to seize their goods, they should go ahead and keep seeing them, adding that any goods seized would not be returned to the owners but would rather be distributed to segments or groups of the society that needs them, like; the preasons, Orphanages, Mental homes among others.
“Keep seizing their goods or motorcycles if that is the only thing that will make them to obey the laws. No more display of wares outside by shop owners. Don’t pity anybody after the initial warning. Avoid Sentiments and Favouritism while carrying out these duties”. He directed. 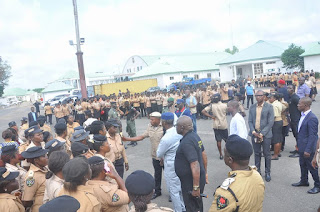 Nwosu also made it clear that in the ban on
motorcycles no group including police and other security agencies were expected. He charged them to go ahead and confisticate anyone they see.
While the General Manager, Imo ENTRACO, Hon .Jeff Nwoha and Commander General of Imo Civil Guard, Chief Donatus Ejifugha are General/Central Committee Chairmen, Members of the Sub Committees include; Hon. Simeon Iwunze, incharge of Wethral Road, Hon.Nelson Ezerioha, Orlu Road, Hon.Emma Ojinere Bank/ Okigwe Road,Hon. Kenneth Emelu, incharge of relocation of block industries in the metropolis, among others.


Onwuka Vivien(Mrs)
PRO TO COS IMGH