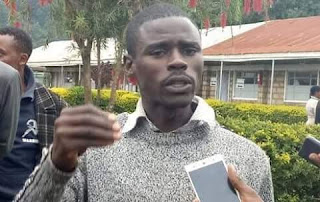 John Paul Mwirigi last evening had a 76 per cent lead on his closest contender, who had 13 per cent.
Mr Mwirigi, who is pursuing a degree in education at Mount Kenya University, was vying as an independent candidate.
He was competing against Jubilee candidate Rufus Miriti, Mzalendo Mwenda (PNU), Mutuma Kubai of Maendeleo Chap Chap, and DP's Raphael Muringi.
Before seeking an elective seat Mwirigi was a boda boda rider in Maua. He also told The Standard that when on school break, he would work as a casual labourer in tea factories in the area, earning Sh350 a day.
His election was funded by donations from friends and young volunteers who sacrificed their time for his victory