The Audition of Face of Arise Afrika held at Blue Ribbon Lounge, Shoprite Owerri on 30th June 2017. Over 40 persons picked up forms to be part of this pageant while 26 Queens scaled through to the next stage of the competition and currently part of the project.
The Management of Face of Arise Afrika Pageant and contestants were present as the race began officially for the MOST TALKED ABOUT BEAUTY PAGEANT.
Pst Adesoji Joseph made a Guest Appearance as he came to inspire and mentor the young talents in the area of harnessing their music talents.
It was waoo and its getting more fun, more exciting, more educating. Audition like never before.
Thanks to you all for your numerous contributions towards Africa arising. At the flag off the Arise Afrika Boss Mr Ikechukwu Anyanwu reminded everyone the theme of this pageant- Redefining Africa to the world. "A lot of people ask me why the theme: Redefining Africa to the world? Why embark on this pageantry? Because we want to in line with our vision raise the beautiful continent of Africa. When culture is lost, all is lost. Our culture is a huge part of who we are and for others we who prefer not to use it as a major identifier. I encourage you to educate yourself on our heritage and embrace our culture. we are recreating our moral, cultural values with this pageantry." In his remark he said if you want to know anything you go to the manufacture to check out what he got to say about that product. So we can not define Africa without looking at God who made us and  He said we are fearly and wonderfully made. We should be proud of our cultural heritage as a people. 1 Continent, 54 Countries, 1 Face of Arise Afrika, 30 winners." He appreciated Frontline Express Newspaper, Gist Gate and all our media partners, Blue Ribbon, Jireh Restaurant official supporters of Face of Arise Afrika 2017.
The judges, Queen Victoria Edoziem, Queen Doreen, Queen Gloria, Chaperon - Queen Sandra Joseph,  Mgt Team Nestor Chisom, Onyi Media Concepts, Mr Donald, Mr Wise, Mr Emma Iwuanyanwu,  Miss Miracle Innocent, Miss Ebube & Deborah all of you were amazing.
Online voting has commenced on our facebook page. Face of Arise Afrika Pageant/Award 2017
Username: Gcfnconsult 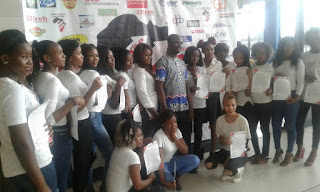