End of the Road for Vampire: dreaded kidnap kingpin, dies in gun battle with police

End of the Road for Vampire:  dreaded kidnap kingpin, dies in gun battle with police 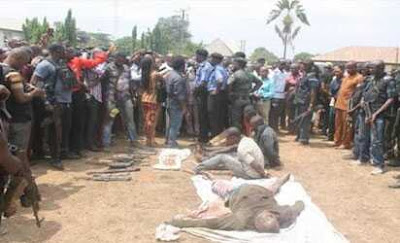 OWERRI—THERE was jubilation yesterday in Imo State, when leader of the most dreaded kidnap gang in the country, Henry Chibueze, popularly called Vampire, was killed during a gun battle between his gang and opera-tives of the Inspector General of Police Intelligence Response Team, IRT, in the early hours of yesterday, in Omu Awa Forest, Ikwerre Local Government Area in Rivers State. 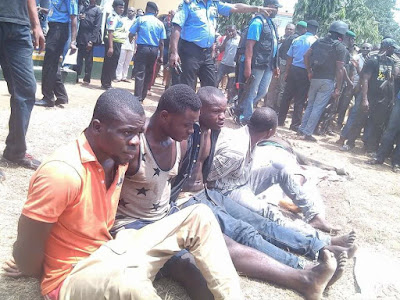 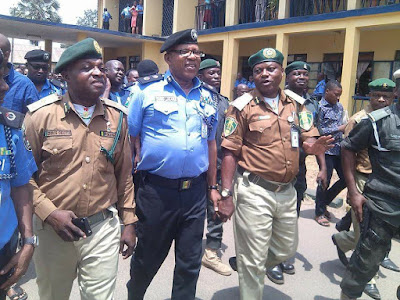 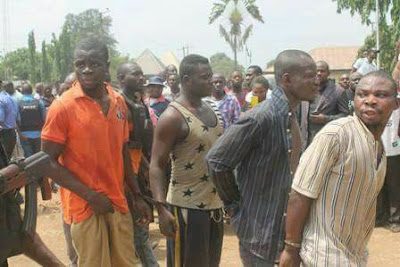 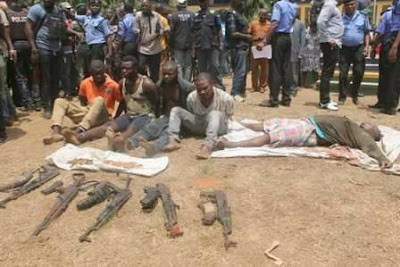 A police Sergeant attached to the IRT, Abia State, sustained multiple bullet wounds. Five suspected members of his gang, including his Second-in-Command, Obinna Elah, 26, a native of Orlu, Imo State, were arrested at the end of the gun battle.

Other suspects arrested were Arinze Abecheta, 24, from Ohafia in Isiala Mbano Local Government Area; Chukwu Ebuka Ikeazota, 23, from Ohohia village, Isiala Mbano area, both in Imo State; Samuel Ugochukwu, 24, from Ezisno village, Arochukwu Local Government Area of Abia State and Clifford Aheana of Omu Awa village. Three of them, who sustained bullet wounds, are reportedly being treated at an undisclosed hospital, with the injured policeman. Several AK-47 rifles and a cache of ammunition and expended shells of bullets were recovered in the forest used by the kidnappers as hideout. Earlier rescued by members Recall that late Vampire was earlier arrested in 2015 and had been in prison custody, following the kidnap of the wife of a government official and was paraded by Department of State Services, DSS, before the state governor then, where he confessed to have carried out several kidnappings in the state and beyond before his arrest. After Chibueze’s escape in January, when his gang members spirited him away from the premises of an Owerri high court, Governor Rochas Okorocha of Imo State announced a N5 million bounty for information that would lead to his arrest. Irked by the recklessness of the gang, the IG, Ibrahim Idris, directed the IRT to go on a massive manhunt for the notorious kidnap gang. Shootout Led by its Commander, Abba Kyari, an Assistant Commissioner of Police, the team, as gathered, traced the kidnappers to a forest in Omu Awa in Ikwerre area of Rivers State. Police sources hinted that: “With Technical Intelligence Support from TIU, at about 1.30a.m. yesterday, Vampire, whose gang members have been responsible for the death of several Nigerians, was shot dead. “The arrested suspects confessed to have successfully rescued Vampire from the Imo high court in January. They also confessed to have executed four successful kidnappings after the rescue of their gang leader.” Paraded Parading Vampire’s partners in crime, the Force Public Relations Officer, Mr. Jimoh Moshood, a Chief Superintendent, disclosed that the exhibits recovered from the suspects included five AK-47 assault rifles, 300 rounds of AK-47 ammunition. He said charms were also recovered from the body of the deceased Vampire. According to Moshood, “if you recall, Vampire was rescued by his colleagues in crime at the Owerri High Court premises. The Inspector General’s special forces tracked him down to a village in the forest in Ikwerre Local Government Area of Rivers State. “On sighting the police, they opened fire and exchange of gunfire ensued. Vampire was gunned down in the process. He had earlier confessed to the murder of his girlfriend, Sandra, and eight members of her family, including six children in Lagos State. “He alleged that his girlfriend stole his N45 million, share of N110 million ransom paid by the family of one of his victims in Omoku, Rivers State.” Vampire was also described as “a serial killer, who also confessed to have killed over 200 in various kidnappings and robbery attacks.” The Inspector General, Ibrahim Idris, who was in Lagos to flag off a bi-annual training of policemen yesterday, confirmed the arrest, stating that the Force would not rest on its oars until acts of criminality were checkmated in the country. Body paraded in Owerri Meanwhile, residents of Owerri in Imo State, went into jubilation yesterday, as the Imo State Police Command moved the lifeless body of Vampire round the major streets of the municipality. Traffic was held up for hours at several points in Owerri, as the police convoy glided through the ever busy Bank Road, Douglas Road, Wetheral Road and back to the State Police Headquarters. Residents’ reaction The show attracted a large crowd to the police premises. Some residents, who spoke to Vanguard, commended the police and other security agencies for not only going after the fleeing Vampire, but also silencing him for life and capturing his acolytes. Reacting to what he called “this cheering news,” an Owerri-based architect, Chief Amaugo Ugorji, commended the security agencies for “completing this wonderful operation in record time and for the good of the citizenry.” Ugorji reasoned that it would have been better to capture him alive, so as to get more information from the deadly hoodlum, adding that the police should ensure that they extract as much information from Vampire’s acolytes as possible. “This may ultimately lead to the arrest of other criminals, who are presently hiding in several states,” Ugorji said. A woman, speaking to Vampire’s lifeless body, said: “You killed my relatives. Look at you now; you will go to hell fire.” Another young man suggested that the police high command should promote all its personnel that took part in the operation, adding “that is one sure way to embolden and encourage others to serve diligently, patriotically and selflessly. “To some extent, we can now have a good sleep.”