Lagos State Governor, Mr. Akinwunmi Ambode on Saturday said his administration would continue to utilise the elements of arts, culture, entertainment, tourism and sports to showcase the potentials that abound in the State. 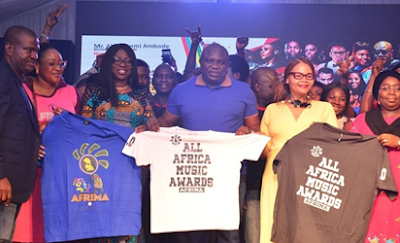 The Governor, who spoke when he hosted members and nominees of the All Africa Music Awards (AFRIMA) to a cocktail at the Lagos House, Ikeja, said Lagos was fast emerging as the entertainment capital of Africa, saying that the State was honoured to be hosting the 2016 AFRIMA awards.

”As you already know, Lagos is a mega city with a vibrant artistic soul. Our aim as the entertainment capital of Africa is to continue to use arts, culture, entertainment, tourism and sports to promote excellence in our state. “This of course is the reason why we are hosting the AFRIMA awards this year and why we are always willing to open our doors to great and credible initiatives that align with our vision to be the foremost hub for tourism and entertainment in Africa,” the Governor said. Governor Ambode said he was impressed with the quality of performances exhibited by the artistes at the AFRIMA music village on Friday night, saying it was a good prelude to the main awards night. “I therefore thank the organizers and the AU delegate for this great initiative and for a job well done. More importantly, my hearty congratulations go to all the nominees. In Lagos, you are all winners and we promise to see you again,” he said. The event featured performances by several nominees and music stars from across the continent, including Naomi Mark, while fast rising comedian, Kehinde Peter Otolorin popularly known as Kenny Blaq thrilled the audience with rib cracking joke