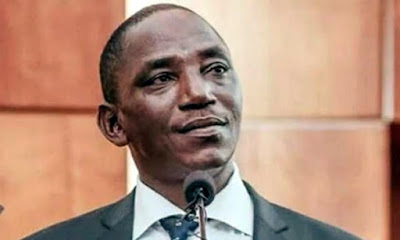 The Minister of Sports, Mr. Solomon Dalung, on Tuesday replied those who have been calling for his sack after the nation’s poor outing at the 2016 Rio Olympics, saying he is not the problem of sports in Nigeria.

Dalung spoke to State House correspondents shortly after  briefing President Muhammadu Buhari of the outcome of the Olympics where Nigeria got a bronze medal in the men’s football event.

“I am not the problem of Nigerian sports. Abysmal performance has been happening before me,” he said.

The minister however attributed Team Nigeria’s poor outing at the Olympics to late release of funds and inability to develop home-grown talents.

Dalung said it was time Nigeria returned to the grassroots and groom talents for future competitions.

He also faulted the scrapping of the Nigerian Sports Commission, saying the commission was necessary.

The minister also said he was yet to be informed officially of the appointment of a new foreign coach for the Super Eagles by the Nigeria Football Federation.

‎‎The NFF had early this month selected a German, Gernot Rohr, to manage the Super Eagles.

He said although he was yet to be informed officially, he wished Rohr the best.

On the coach of the Dream XI team, ‎Samson Siasia, the minister expressed disappointment at the treatment meted to a coach whose team won the only medal at Rio’s Olympics by the NFF by withdrawing his official car in Abuja while he was battling to secure a medal for the country in Rio.

Dalung, who confirmed he met with Siasia a day before, said Nigeria still needed him ‎in football development.

He said even if the NFF would not re-engage him, the Federation should at least, give him some peace of mind to enable him make his contributions in a personal capacity.

He said it would be sad to lose Siasia out of frustration to another country who appreciates his worth, just like many athletes did as witnessed during the Rio Olympics.

On  the $390, 000 donation to Siasia and his team by a Japanese surgeon, the minister said after he met the donor in Rio, he was convinced there were no strings like match-fixing, attached to the donation.